Valentina Tereshkova, who currently serves as a deputy of the ruling United Russia party, took advantage of an opportunity to support the constitutional construction of her nation for the second time in a lifetime. During the times of Leonid Brezhnev, in her October 1977 appeal, Valentina Tereshkova thanked the party, the CPSU Central Committee, and Leonid Brezhnev personally for their work on the text of the new Constitution of the USSR. 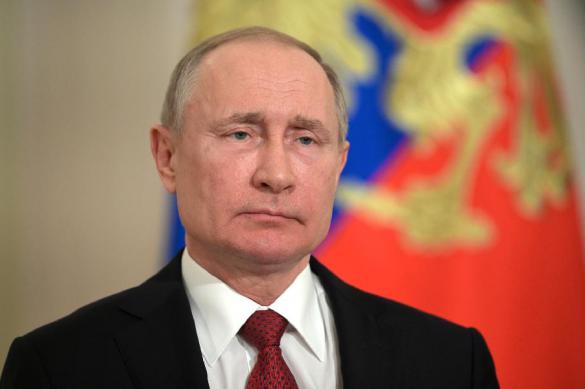 In the era of sanctions and import substitution, Tereshkova, first woman in space, also expressed her gratitude to the Russian leader and unpretentiously proposed to reset his presidential term to zero and start the countdown again. In other words, she suggested Putin should stay in power before 2036 and then before 2048 - for life that is.

Vladimir Putin, speaking before the State Duma, said that Russia was still overcoming consequences of the collapse of the Soviet Union. Apparently, we should be happy that the country has been able to leave behind the legacy of the Golden Horde and the devastation after the Patriotic War of 1812.

The head of state noted that he considers the change of power to be important, but...:

"When the political, economic, social spheres gain internal stability, maturity, when the state becomes, of course, more powerful and invulnerable from the outside, then it is the succession of power that comes to the forefront. It is required for the dynamics of the country's development."

Putin then added some stability to his statement:

"We are accepting amendments not for a year, not for two years, and not even for a decade. I hope that we are doing this for a more distant historical perspective, at least for 30-50 years. In this long-term perspective, the society should have guarantees, that a regular change of power will be ensured."

It just so happens that the succession of power, which, according to the president, is an important component of the country's development, enjoys no demand today. This may mean that Russia is not supposed to develop for some 30-50 years.

Speaking about the legitimacy of the move to reset his terms to zero, Putin said:

"In principle, this option could be possible, but only if the Constitutional Court of the Russian Federation gives an official conclusion that such an amendment will not contradict the principles and basic provisions of the Basic Law, the Constitution."

The Constitutional Court will thus have to decide that the mentioning of God in Article 67.1 of the fundamental law does not contradict the declaration of the secular state (Article 14). The court may approve the thesis of the state-forming people. The court may decide that it is only citizens themselves, who have the right to determine their nationality, while discrimination on ethnic grounds is prohibited.

Russian citizens, encouraged by the prospect of seeing Putin in power for the sake of Russia's stability until the middle of this century, started going out to the walls of the Moscow Kremlin for solitary pickets to express their protest.

Representatives of public organizations representing the so-called non-systemic opposition have already submitted applications at the Moscow City Government to be able to hold protest actions in late March.

However, the Moscow authorities have banned mass public events in the city with the participation of more than 5,000 people due to the outbreak of coronavirus infection. The regime of restrictions will last until April 10, 2020, but no one will prevent them from being extended until April 22nd, when the Russians are supposed to go to the polls for vote for the new Constitution.

It is a pity that the Russian authorities have not proposed other amendments to the Russian Constitution, which could, in particular, be: