USA continues war games to learn how to nuke Russia

It was reported that the USA intends to continue its long-range missions of strategic nuclear bombers. Defense News publication makes a reference to a source in the United States Strategic Command of the US Armed Forces (USSTRATCOM). 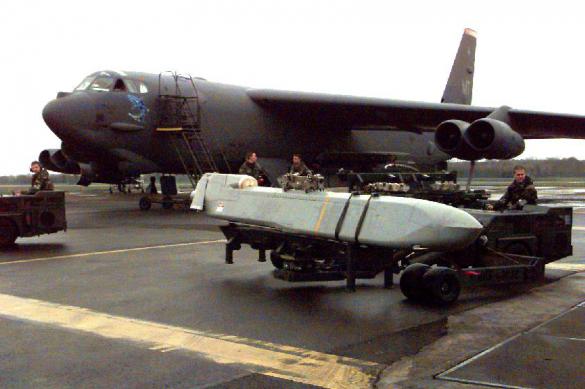 First and foremost, it goes about training flights to the borders of Russia and China, as well as "nuclear bombing exercises," to conduct a nuclear attack on the Crimea and Kaliningrad, Murmansk and several territories of the Southern Federal District of the Russian Federation.

Officially, the US command conducts such events as part of activities to ensure the protection of NATO allies and contain potential adversaries. Noteworthy, the USA has been increasing the number of such flights lately.

Back in 1949, the US command developed the Operation Dropshot in case of war with the USSR. Starting from the second half of the 1950s, B-52 strategic bombers, which were used to transport nuclear missiles and bombs, would make regular long-distance flights over the borders of the Soviet Union.

The USA still follows Cold War traditions today. Not that long ago, it became known that at the end of Barack Obama's presidential term high-ranking military officials held war games, which suggested a global war with Russia.

As part of the games, American strategists came to conclusion that one of the first nuclear strikes needs to be carried out against Belarus, just to be on the safe side.

In 2019, B-52s were spotted in airspace over the Baltic waters close to the Kaliningrad region, and then near the Crimea. The purpose was nothing but 'training flights.'

The USA is extremely concerned about Russia's new hypersonic weapons. Moreover, the USA wants Russia to destroy those new weapons. Moscow, however, has no intention to bid farewell to those arms.

As many experts believe, the USA will start a new arms race when it exists the START-3 treaty. No wonder, given the fact that this race has been in full swing lately anyway. International treaties restrain this process at a minimum level.

It was also reported that the USA can arrange live nuclear tests within a few months, at the request of the president.

US nuclear doctrine does not exclude offensive strike

The nuclear doctrine, which the United States amended a couple of years ago, currently admits a possibility of the nuclear strike to change the situation on the battlefield in USA's favor as quickly as possible. For the time being, however, the USA and Russia still preserve nuclear parity.

Russian strategic bombers Tu-160 and Tu-95MS fly close to the borders of the United States too, just to say hi. Reportedly, the bombers fly towards the USA every year on July 4, to "congratulate" our American partners on Independence Day.

What subcategory of human being takes a knee on a handcuffed man, mashed face down on the pavement and, ultimately, forces him to die?

How much violence and destruction is enough for depraved American leaders? John Stanton